Archbishop Thabo continues his account of a visit to the Diocese of St Helena:

Thursday November 15 - later in the morning

After climbing Jacob's Ladder together with our visiting party, I joined Bishop Dale and the Canon for Morning Prayer. Then our episcopal team joined Dale and me for another Bishops' peer training session.

We concluded the session on the issue of Church governance and the Bishop's role as the main liturgist in the Diocese. We addressed the question of how scripture, self-knowledge and your response to God's mission enables you as a bishop to create structures in the Diocese that breathe life and release others for mission.

Then we visited and worshipped with elderly women in the Princess Royal Community Care home, a beautiful facility where they were well looked after. Some were in their late 90s, like my aunties back at home, and one was 100 years old. We sung a couple of hymns and prayed with them, and I gave them a short message and a blessing.

Then we all went to the other side of the island, to the area of Sandy Bay, passing Anne's Peak, a lush green area but more built up than some other districts. We visited churches there and learned more history, then stopped at the Bishop's house, which is being renovated to welcome the Bower family - Bishop Dale, Penny and their two lovely boys. We had lunch on the stoep.

I asked that we revisit graves we had seen earlier in the week; graves carry a lot of history. 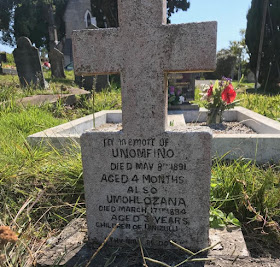 Firstly we went back to the graves of Dinuzulu's children at St Paul's Cathedral. They had died on the island when the British had exiled the King to St Helena. The ages at which they died - Unomfino at four months' old in 1891, and Umohlozana aged three in 1894 - vividly demonstrated the pain of war.

Then we visited the graves of Boer prisoners-of-war who were sent to the island after being captured during the Anglo-Boer War, and saw a house in which General Piet Cronje had been accommodated. (See photos below.)

Tonight we capped our visit with dinner with the Governor, Lisa Honan CBE, at her official residence, Plantation House. She and her husband Dave were generous hosts, serving us a meal of many courses. It was a relaxed evening indeed and great talk. I was asked to reflect on aspects of my book, Faith & Courage. I was moved that both she and Dave have read the book, and the questions I was asked to comment on were the Incarnation and politics, integration and Madiba.

It has been windy today, and the Saints - that's how St Helenians describe themselves - were complaining that this weather is uncharacteristic. 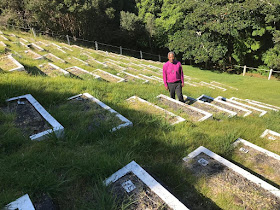 Thanks for your feedback! Note that we do not normally publish your Anonymous comments here. Rather comment on our Facebook page: https://www.facebook.com/anglicanmediasa/